In October I applied for DevOps Engineering Program at Insight Fellows. The program offers an intensive 7 week full-time training designed to help engineers transition into the field of DevOps engineering. I somehow went through the first screening process and was invited to participate in the monitoring challenge.

There are many ways to complete the tasks. Here is how I solve the challenge: 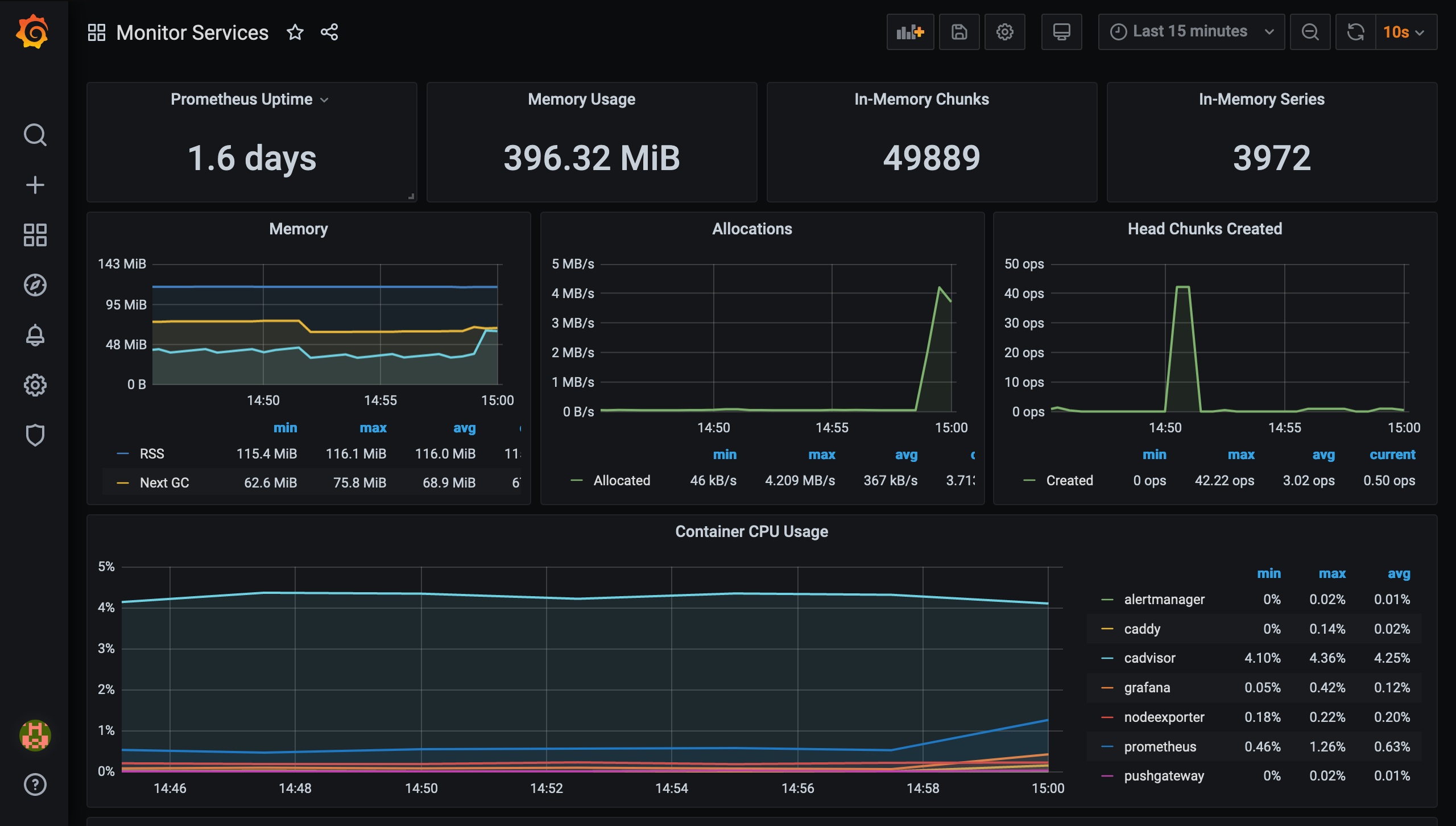 The challenge requires 3 EC2 instances. First, I start by creating one EC2 instance, I name it Instance-0, using Amazon Machine Image (AMI) with t2.micro size in EC2 Dashboard. In this process, an SSH key needs to be selected in order to log into the instance as well as a security group for networking access. 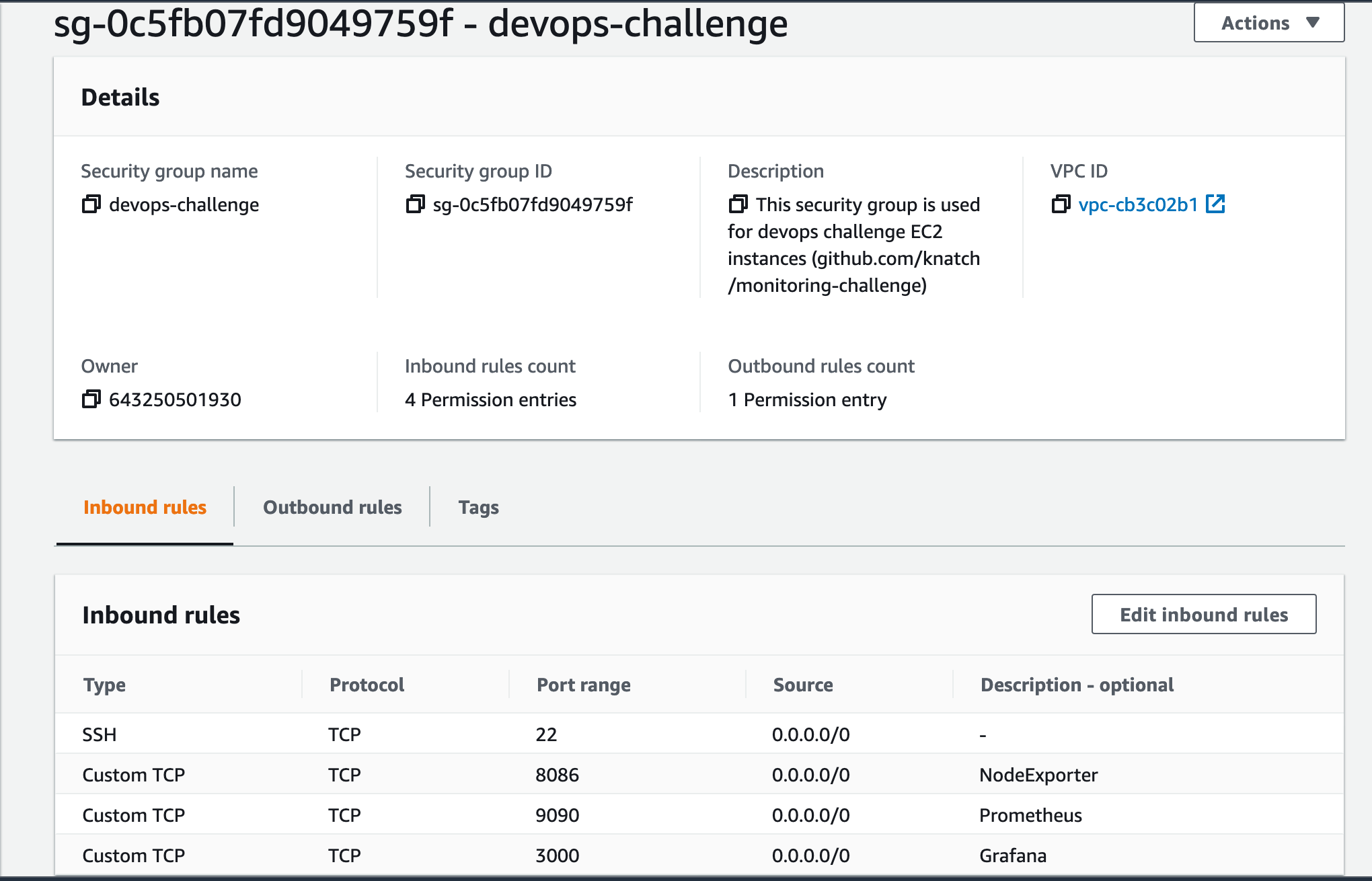 Using the Instance-0's Public IPv4 address and the specified SSH key, in a local machine terminal, I am now able to SSH into the instance. Next, I configure the AWS CLI to manage AWS services by pasting AWS credentials into Instance-0 ~/.aws/credentials file and run aws configure.

AWS Command Line Interface (CLI) is a unified tool to manage AWS services. AWS CLI provides control over multiple AWS services from the command line and automate them through scripts which is beneficial in this task. As I need to create another 2 EC2 instances that I am going to be monitored on, the command I am going to run is aws ec2 run-instances. Before that, I paste a file into Instance-0. This file contains commands that will install required dependencies when a Linux instance launches. The file's name is launch.sh.

Now that the credentials is set and the launch file is in place, I execute the ec2 run-instances command as follows. After several minutes, 3 EC2 instances should display in the EC2 Dashboard in the AWS EC2 Dashboard.

--image-id
specifies the ID of the AMI
--instance-type
Amazon EC2 instance type
--key-name
the name of the key pair
--security-groups
the name of the security group, using the one I just created give the instances
--tag-specifications
a tag name for this resources
--user-data
specifies a file used to perform automated configuration tasks

As I already have configured 2 EC2 instances via the AWS CLI, I now need to set up dockprom on Instance-0. I can run the same set of commands I have in file launch.sh (but with sudo privilege).

In order to display CPU, memory and disk space metrics from the target sources, I import a Grafana Dashboard for the task. The dashboard is called ​Node Exporter Server Metric . The left side displays the metrics from Instance-1 while the right Instance-2 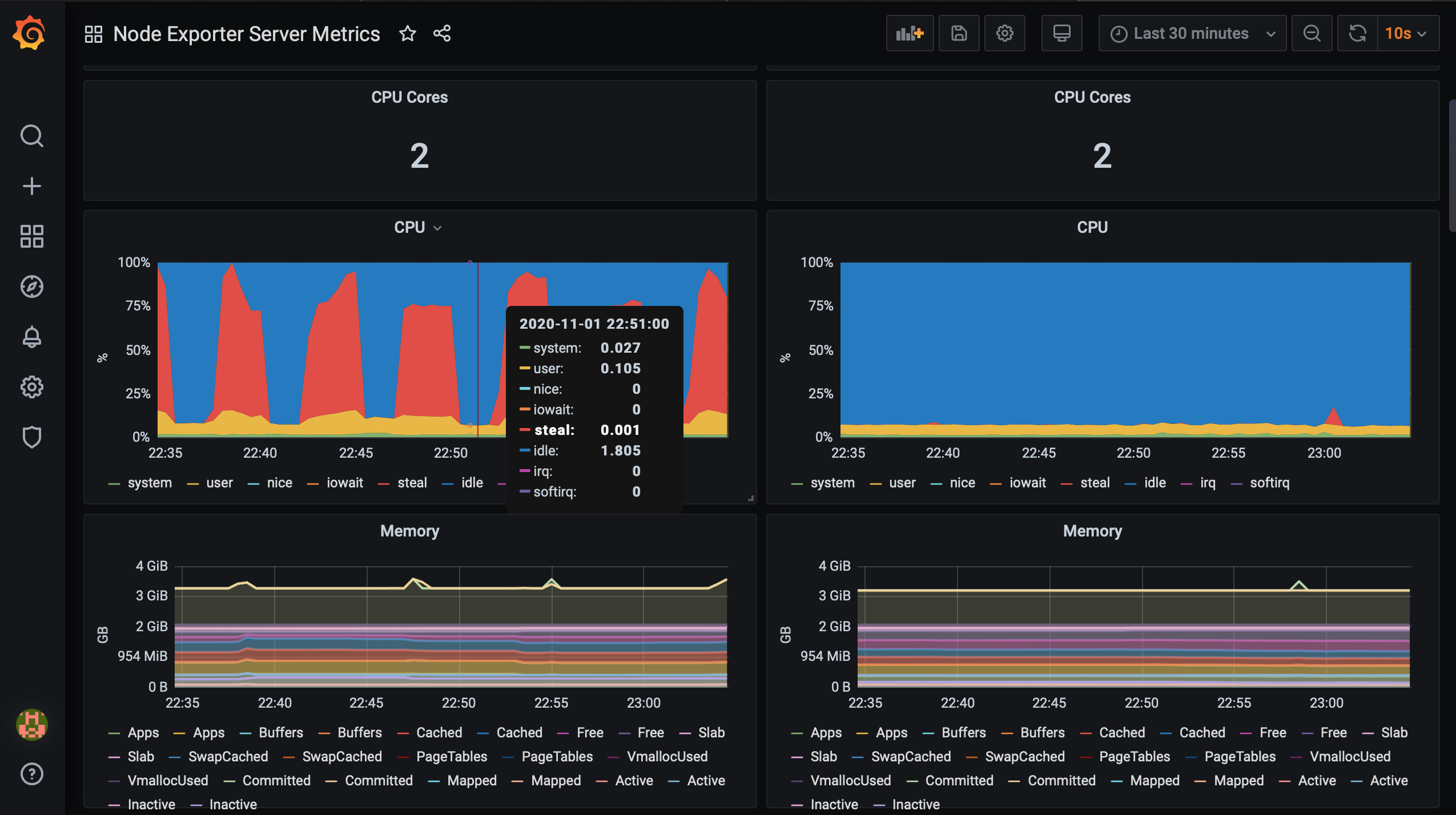 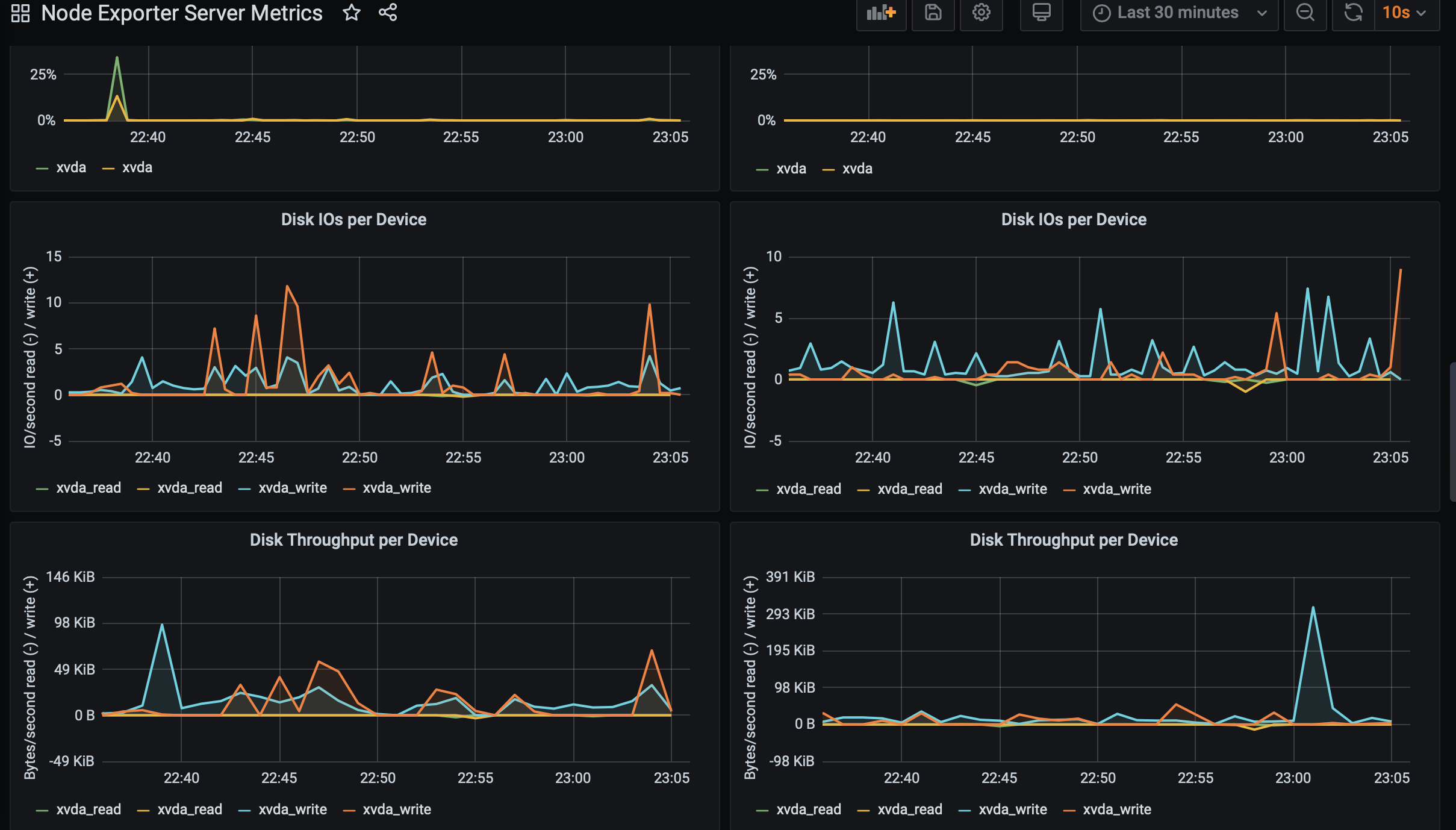 For this task, I install the stress-ng package to simulate high usage on the monitored instances by running 2 commands on Instance-2. (This could also be done during instance initialization by adding the commands inside launch.sh file and instead of SSHing directly into the instance, we can also issue the command via AWS CLI SSM)

With the package installed, I can run the command to stress the CPU usage on the instance

Notice the spike in CPU, memory and disk usage on the instance in Grafana Dashboard 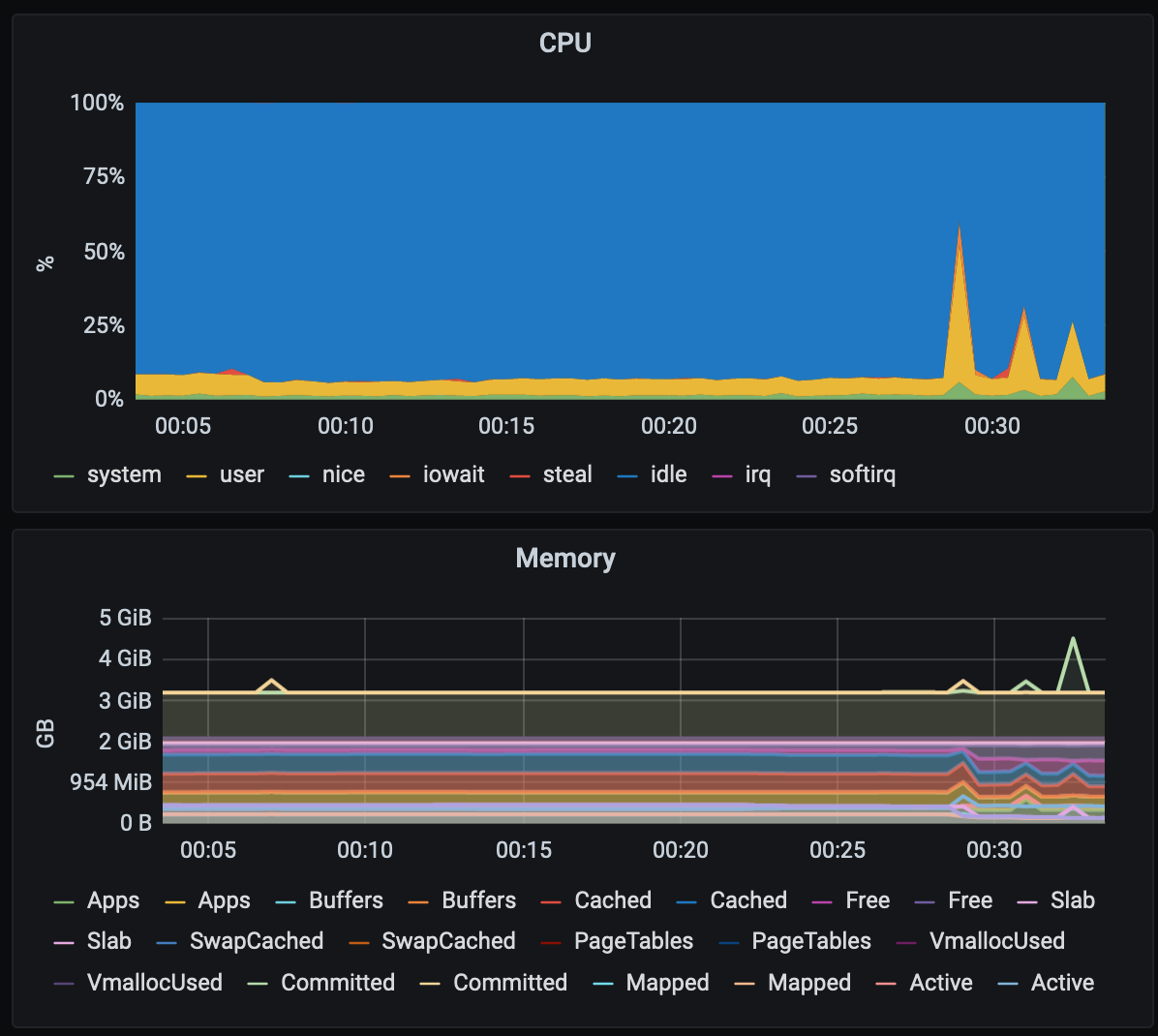 That is how I solve the challenge. I know a superb engineer friend of mine who would have elected to resolve this task with ansible as an alternative for AWS CLI. As already stated above, there are numerous ways to complete the challenge. Should you read it all the way down here and have any comments/recommendations on how I can improve the process, kindly let me know.